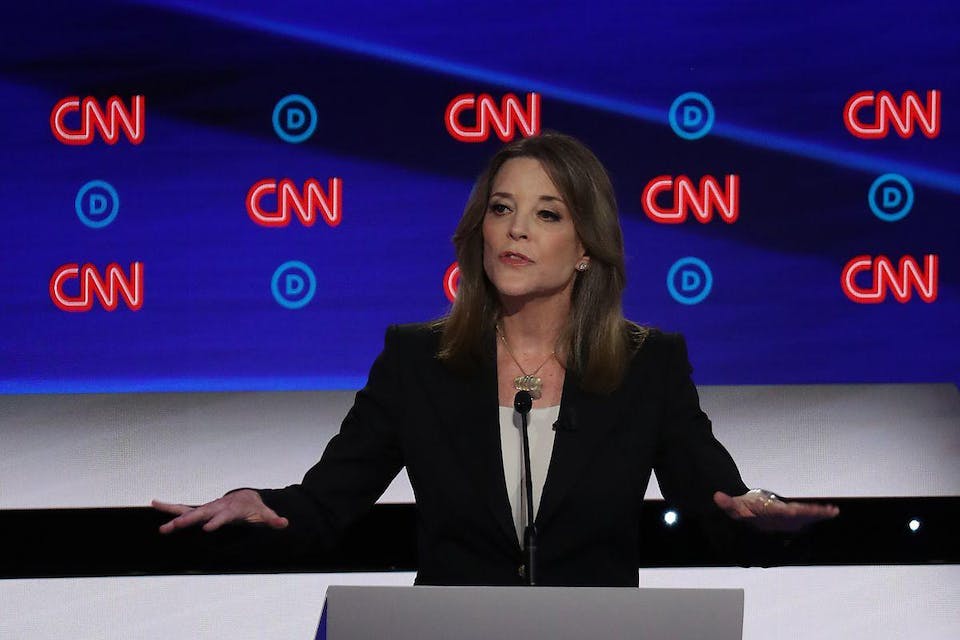 A Conversation with US Presidential Candidate Marianne Williamson

iCal
Google
Marianne Williamson is coming to Manny's and wants to meet you!

Manny's and the Next 50 are excited to host another 2020 contender in the San Francisco Bay Area: Marianne Williamson!

She will be speaking and taking questions.

Free and everyone is welcome. Registration is required.

More about Marianne from her campaign site:

Where I Come From

I was born in Houston, Texas in 1952. My mother was a traditional housewife and my father was an immigration lawyer. My parents were world travelers, taking my brother Peter, my late sister Jane and me traveling with them around the world when we were children. The fact that I traveled internationally at such a young age made me a different person than I would otherwise have become. I learned very early, with the clarity of a child, that everyone deep down is the same.

While I didn't realize it growing up, as an adult I have come to recognize the impeccable ethics and values that were demonstrated to me as a child.

Growing up in Texas in a liberal household, I was made deeply aware of issues of social justice. My father had grown up in poverty; he was insistent that we be aware of how fortunate we were, and always attendant to the needs of those who were not. All four of my grandparents were immigrants from Eastern Europe, and had found in this country the freedom they longed for while living in oppressive circumstances. From the time I was a child I was taught the importance of America's promise, and the moral responsibility that each of us has to keep it alive and bequeath it to others. Where I saw something wrong, I was taught it’s my responsibility to make it right.

I went to public schools in Houston, and as the Sixties Revolution burst onto the scene I was eager to be part of it. From the cultural and spiritual revolution of that time, to the anti-war protests and political activism that marked the era, I was every bit a child of my generation. I spent two years at Pomona College in Claremont, California, and from there went on to experience pretty much every outwardly insignificant thing and every inwardly profound thing that’s possible.

The most consistent thing about my early Twenties was a search for spiritual understanding. I had a voracious appetite for topics of comparative religion and philosophy, and in my mid-20's I began reading a set of books called A Course in Miracles. The Course is not a religion, but rather a self-study program of spiritual psychotherapy based on universal spiritual themes. There is no dogma or doctrine; it is simply a book on how to forgive. I had no idea at the time that my study of The Course, plus writing and speaking about it, would turn into a 35-year career.

"The Presidency is not merely an administrative office. That's the least of it....It is pre-eminently a place of moral leadership."

How My Career Began

In the early 1980’s, there was no professional niche involving non-denominational spirituality. Since I didn’t see myself becoming clergy or a religious academic or a traditional psychotherapist, I thought my speaking about A Course in Miracles to small groups was simply an avocation. I threw myself into teaching, counseling, and writing based on the teachings of the Course.

When I began speaking to small groups about the Course at the Philosophical Research Society in Los Angeles in 1983, the strange and horrifying AIDS epidemic burst onto the scene. Los Angeles was hit particularly hard by the disease, and many of its victims found their way to my talks. I became deeply involved in the crisis, facilitating counseling and support groups; non-profit organizations in Los Angeles and New York to provide non-medical support to people living with life-challenging illnesses; and the creation of Project Angel Food, a meals-on-wheels service to homebound people with AIDS that has now served over 11 million meals to people in the Los Angeles area. In a very real sense, my life's work emerged from that experience.

Also in the 1980’s, I began lecturing in New York and other cities as well, including talks and seminars in Europe. In 1992, I published my first book, A RETURN TO LOVE: Reflections on the Principles of A Course in Miracles. Little did I know, as an unknown first-time author, the power of a call from Oprah. She invited me to be a guest on the Oprah Show, and on the program, she gave away a thousand copies of the book. From there it went on to become the 5th largest selling book in America that year.

I have since published 12 other books, the fourth of which, published in 1997, was called Healing the Soul of America. Four of my books have been #1 New York Times bestsellers. I have written a book called A Politics of Love: Handbook for a New American Revolution, which will be published this Spring. After my experience with the AIDS crisis, I had become deeply aware of the larger personal, economic and social problems faced by people throughout our country and the world. The political convictions of my family of origin, combined with my own in-depth experience of people’s everyday problems over a period of many years, created within me an ever-increasing realization of the depth of our problems in this country as well as of God’s unlimited capacity to solve them. Spiritual audiences haven't always been happy with my political activism, and political audiences haven't always been happy with my spiritual convictions, but the combination of the two is who I am.

My career has not been a traditional one, but it has been successful. I have been a teacher of transformational wisdom, a successful businesswoman, and a political activist. I have counseled leaders ranging from business to culture to politics. I have been blessed to participate in many non-profit activities, including co-founding The Peace Alliance, working on the Board of RESULTS, and speaking for various charitable causes over the years. In 2014, I ran for Congress in Los Angeles and came in 4th out of a field of 16 in a jungle primary. LA District 33 ended up with the venerable Ted Lieu in that position, so I consider it an all’s-well-that-ends-well experience in my life.

“We can't solve problems by using the same kind of thinking we used when we created them.”

A lot happens in the life of a woman between the ages of 31, when my career began, and 66, which I am now. I have had a meaningful career; I have a wonderful daughter, India, age 28; and I am now at the point where my deepest desire is to take what I've learned and express it in a way that best serves others. Like millions of Americans, I am sickened and saddened to see the state of our country and I believe that I can help.

I do not see American politics today as a conduit for a deep and meaningful transformative experience, either for our citizens or for our country. Our government is now little more than a system of legalized bribery, and our traditional political establishment at its best is a container for an obsolete conversation about democracy, and values, and people. It has become an entity unto itself, more and more disconnected from the everyday lives that are led by people throughout the country. As someone whose entire career has been spent listening to people’s pain, I see the inability of our political establishment to register that pain, and respond to it, as perilous and destructive to our democracy.

Our deepest political problems are expressed on the level of politics, but they are not rooted there. Our deepest problem is the disengagement of the American heart from the values we purport to hold most dear, and the failure of too many of our citizens to vitally participate in the expression of those values. A disengaged citizenry is to society what a weakened immune system is to the body, and that is the level on which as a country we most need revitalization. What America most needs is a renewal of the spirit of our democracy, in the absence of which the political corruption and human devastation that have become all too common in America will continue to erode our nation. As someone who has had a thirty-five-year career facilitating personal and systems transformation, I believe I have expertise and skill that is most needed at this time.

What we most need now is a political visionary -- someone with a deep understanding of where we have been and where we need to be going. While car mechanics are important, they aren't necessarily the ones who know how to drive you to where you want to go. It is unreasonable to expect the mindset that drove us into the ditch, to be able to pull us out of it. It's not enough now to just know what's happening inside Washington; we need someone who also knows what's happening inside us.

My campaign provides the American people with the option of choosing another way -- not just a better version of same old, same old politics, but a genuine pattern disruption that allows for breakthroughs and possibilities that will not otherwise occur. It is for those who want the person sitting behind the desk in the Oval Office to be someone with an expanded sense of what is necessary, as well as what's possible, in the 21st Century.

From what is essentially a sociopathic economic system, to a government that has become little more than a handmaiden to that system, to the dark influence of money on our politics, to the systematic neglect of millions of chronically traumatized children, to our need to fundamentally address issues of racial injustice, to our need to wage peace as well as to be prepared for war, to the sacrifice of America's moral values within the public sphere -- we need to do more than water the leaves of our democracy. We need to water the roots. We need to address the deep emotional and psychological dynamics within the average citizen that have led to the erosion of our political system. In order to have a moral and spiritual awakening in America, we need a leader who is a moral and spiritual awakener.

I believe I am that person.