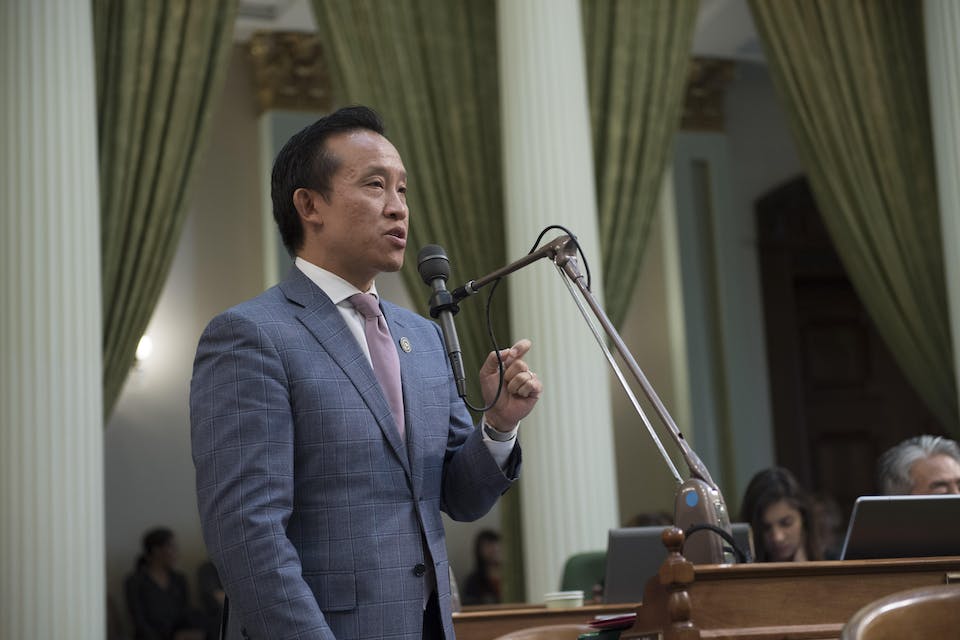 iCal
Google
David Chiu is the chair of the Housing Committee in the California State Assembly. We are in the midst of an affordable housing crisis.

David Chiu represents the Castro, Mission, Noe Valley, Downtown, Chinatown, Bernal, the Bayview, North Beach, and Chinatown in Sacramento. He is also the chair of the Housing and Community Development Committee.

Join a special local leaders series living room conversation with former President of the Board of Supervisors and current Assemblymember David Chiu about addressing the housing crisis and what it's like to represent of San Francisco in the state assembly!

As a member of the California State Legislature, David Chiu represents the 17th Assembly District, which encompasses eastern San Francisco. He was first elected in 2014 and re-elected in 2016 and 2018. During David's first year, he served as Assistant Speaker pro Tempore; since 2016, he has served as Chair of the Assembly Housing & Community Development Committee. He also sits on the following legislative committees: Budget; Business and Professions; Judiciary; Arts, Entertainment, Sports, Tourism, and Internet Media. He also serves as Chair of the California Asian Pacific Islander Legislative Caucus.

During his first four years in the Assembly, David has authored 48 bills that were signed into law by the Governor. Among other efforts, the bills addressed the state’s housing crisis, protected tenants, assisted LGBT families, upheld a woman’s right to choose, promoted sustainable transportation options, and facilitated voting by young people.

Before joining the State Assembly, David Chiu served as President of the San Francisco Board of Supervisors for six years. With a reputation as a consensus maker, Chiu was the first Board President in San Francisco history elected by fellow Supervisors to three consecutive terms, and the first Asian American to hold the post. Chiu was first elected Supervisor in 2008 and then re-elected in 2012 to represent San Francisco’s northeast neighborhoods of District 3, which includes the city’s major tourism, retail, downtown and wharf areas. As Supervisor, David Chiu authored 110 ordinances across a wide range of policy areas, including affordable housing, job creation, public safety, healthcare, the environment, transportation, civil rights, language access, ethics and technology.

The son of immigrant parents, David Chiu grew up in Boston and received his undergraduate, law and master’s in public policy degrees from Harvard University. In the mid-1990s, Chiu served as Democratic Counsel to the U.S. Senate Constitution Subcommittee. After moving to San Francisco in 1996, David Chiu served as a criminal prosecutor at the San Francisco District Attorney's Office and as a civil rights attorney with the Lawyers' Committee for Civil Rights. Chiu was also a founder of the public affairs technology company Grassroots Enterprise, where he served as Chief Operating Officer.

Before running for office, David Chiu was a hands-on leader in San Francisco. He served as a Small Business Commissioner, president of the Asian American Bar Association of the Greater Bay Area, board chair of the Youth Leadership Institute, Lower Polk Neighbors and the Chinatown Community Development Center, and board member of Partners Ending Domestic Abuse and Chinese for Affirmative Action. Chiu was elected three times to the leadership of the San Francisco Democratic Party. He has been named a Young Global Leader by the World Economic Forum, an American Memorial Marshall Fellow, and one of the “Best Attorneys under 40” by the National Asian Pacific American Bar Association.

David Chiu is married to Candace Chen. A third generation San Franciscan, Candace is a public interest lawyer who manages a refugee foster care youth program. Their son Lucas was born in February 2016.