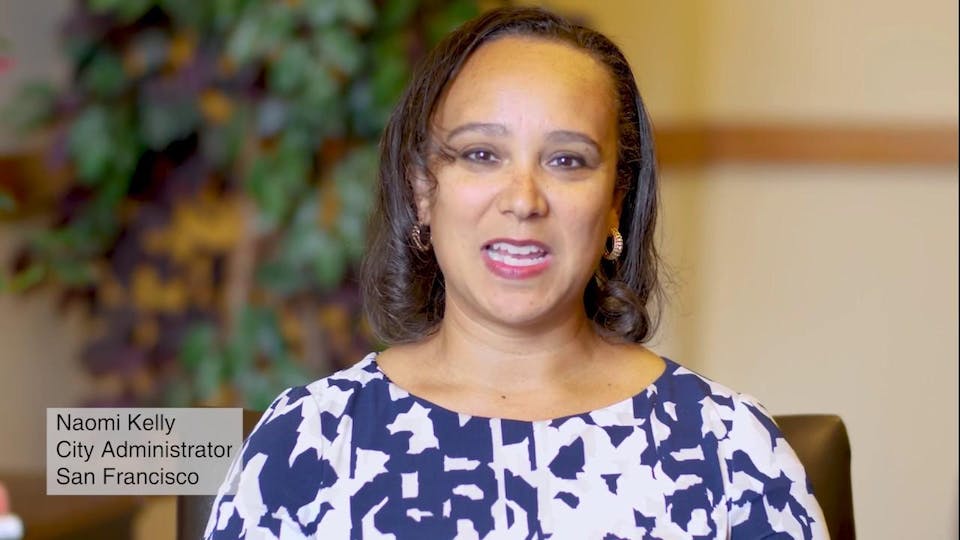 iCal
Google
She is the highest ranking non-elected official in San Francisco. Her job is basically to make the whole city run. Her name is Naomi Kelly.

If you're interested in how San Francisco is run you have got to meet Naomi Kelly!

She is responsible for a 2,700-strong workforce, and an annual budget of nearly three-quarters of a billion dollars.

Since her appointment and re-appointment by Mayor Edwin Lee in 2012 and 2017, her accomplishments include:

The launching or absorbing of new programs such as: Committee on Information Technology (COIT); Office of Short Term Rentals; Contract Monitoring Division; and Earthquake Safety Improvement Program / Office of Resilience and Recovery;

The creation of a Budget and Planning team to improve budgeting, financial management, policy analysis, and program evaluation, and to utilize financial models for citywide work order programs and the elimination of structural deficits;

Serving on numerous boards and committees including:

Capital Planning Committee: As Chair of this Committee, Ms. Kelly oversees a $35 billion, 10-year capital plan for the long-term safety, accessibility and modernization of San Francisco’s public infrastructure and facilities; sea level rise planning, and securing bond approvals in the areas of public health and transportation;

Workforce Investment San Francisco (WISF) Board: WISF is responsible for creating strategic workforce connections among industry, business, labor, educational institutions, and community based organizations to serve the needs of workers and employers in the region, and to support the City’s vision for economic competitiveness;

SF Community Investment Fund (SFCIF) Board: SFCIF is a California nonprofit public benefit corporation that serves as a community development entity to apply for a new market tax credits allocation from the U.S. Treasury to help underserved communities, and provide private capital investment to projects that may not otherwise be completed; and

Mayor’s “Our Children, Our Families” Council: The Council is responsible for developing a five-year plan to coordinate available resources and services for data-sharing between the City and schools to better serve families, children and youth in the City. The Council will also create, maintain and make available an inventory of all citywide services for children and youth, including state and federally funded programs.

Oversight and management of major private-public partnerships such as the celebration of the San Francisco City Hall Centennial, and the Bay Area Women’s Summit;

Authorization of same-sex marriage license issuances at San Francisco City Hall in late June 2013 just hours after a federal appeals court cleared the way for the State of California to lift a 4.5 year freeze;

Facilitation of major program accomplishments, such as:

Fleet (3 fleets of multiple vehicles and more than 500 users): expanded use of telematics, and launched Vehicle on Demand System (VoDS).