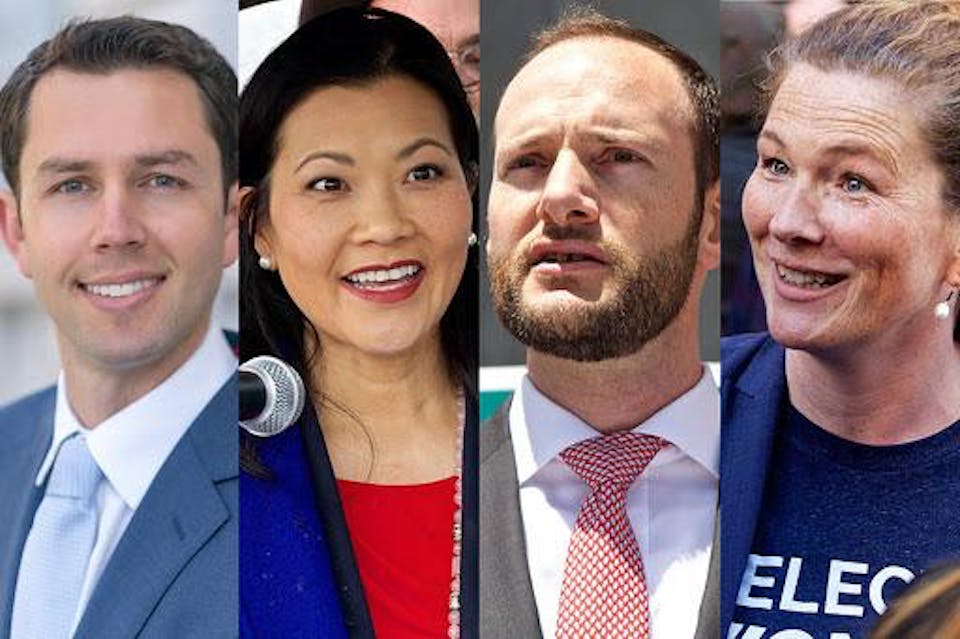 iCal
Google
Leif Dautch, Nancy Tung, Chesa Boudin and Suzy Loftus are running for SF District Attorney. This is your opportunity to ask them questions!

San Francisco is electing a new district attorney this November.

Leif Dautch, Nancy Tung, Chesa Boudin and Suzy Loftus are all vying for the position. But, who is your candidate?

Manny's will be hosting a district attorney debate moderated by San Francisco Chroncile reporter Heather Knight and you are invited to meet the candidates yourself. Each candidate will get a 15 minute interview slot.

***District attorney debate will begin as soon as Democratic debates are over. Start time may vary.

More about the candidates:

Leif Dautch is a Deputy Attorney General for the State of California and the Past President of the San Francisco Juvenile Probation Commission. The son of an organic farmer and a registered nurse, Leif grew up along California’s Central Coast. When Leif was a kid, his mom worked night shifts as a nurse at the local juvenile hall. His family became foster parents, and they took in a dozen kids over the course of a decade, adopting two. Leif saw firsthand the effects of trauma, race, and poverty, but he also saw amazing people like his mom working within the justice system to ensure that a one-time mistake did not turn into a life of crime.

It was that childhood exposure to the justice system that set Leif on a path from a small organic farm in rural California to graduating with honors from Yale and Harvard Law School, to externing for San Francisco District Attorney Kamala Harris, clerking on the Ninth Circuit, serving as President of the San Francisco Juvenile Probation Commission, and working as a Deputy Attorney General for the State of California. Over the past seven years, Leif has prosecuted more than 400 criminal cases, from trials to arguing in the California Supreme Court. Leif has also served as a policy advisor, drafting legislation and testifying before the California State Assembly and State Senate on issues ranging from human trafficking to environmental protection. As an Assistant Team Leader, he helps supervise a team of attorneys and has served on the Criminal Division’s Hiring Committee and Technology Task Force.

Leif was recognized on Forbes’ list of rising lawyers and policymakers and has written for the San Francisco Chronicle, San Francisco Examiner, and Washington Post on topics including car break-ins, environmental justice, and income inequality.

Nancy Tung, a trial prosecutor and former Deputy California Attorney General with nearly two decades of experience delivering justice for the People, she has handled thousands of cases in local, state, and federal courts. As our District Attorney, Nancy will move criminal justice reform forward in San Francisco with a vision she calls Community-Centered Justice. She will prioritize early intervention to address challenges facing our neighborhoods, and she is committed to leading a District Attorney’s Office that is effective, proactive, transparent, and upholds our progressive values as San Franciscans.

Nancy’s parents immigrated to the U.S. for a better life. They marveled at the freedoms granted to ordinary people. Nancy’s father inspired her with his love of democracy and the law, leading Nancy to choose a career in public service.

Nancy attended UC Berkeley, where as a student she mentored young women and was the student director of the prestigious Cal in Sacramento program, providing students with fellowships to gain first-hand experience in California state government.

After graduating from UC Berkeley in just three years, Nancy worked her way through Georgetown University Law Center. She thrived there as she learned the power of the law to help people. While training to become an attorney, she represented low-income tenants in disputes with landlords and helped keep working families in their homes. After law school, she spent a year at a small private firm in L.A., but quickly realized public service was her true calling. In 2001, she moved to San Francisco to serve as a Deputy Attorney General and never looked back. As a prosecutor for the State of California, she protected the public in state and federal court. Her work from that time included partnering with local District Attorneys to return internationally kidnapped children to their families.

Nancy has the most courtroom experience of any candidate for District Attorney. She worked as a prosecutor in the San Francisco District Attorney’s Office for over a decade, prosecuting domestic violence cases, protecting consumers, and upholding public integrity by prosecuting police misconduct, fraud, and embezzlement. As a senior prosecutor, Nancy has mentored dozens of San Francisco prosecutors and is regarded as a statewide leader on legal ethics and consumer protection issues. Today, Nancy is a Deputy District Attorney in Alameda County, where she leads statewide teams of attorneys in complex investigations and prosecutions. There, Nancy created the Consumer Mediation Unit, investigates whistleblower cases jointly with state agencies, and is currently investigating large multi-national companies in technology, energy, and pharmaceutical sectors.

Chesa Boudin's father is still in prison. Chesa knows first-hand the destructive impacts of mass incarceration – he had to go through a metal detector and steel gates just to give his parents a hug. Though he was not physically injured that tragic day, he was one of the dozens of people whose lives were devastated. But restorative justice saved him – and did more to rehabilitate his parents than any number of years in prison ever could.

This experience caused Chesa to dedicate his career to making our country safer by reforming our criminal justice system. Beginning in high school, he spoke out on behalf of children of incarcerated parents.

Through his education at Yale, as a Rhodes Scholar at Oxford University and Yale Law School, Chesa continued to be an advocate for reform. After law school, he worked for two federal judges handling criminal trials and appeals, authorizing search warrants, and learning the highest standards for ethics and integrity in the application of the law.

As a San Francisco Deputy Public Defender, Chesa has handled more than 300 felony cases including attempted murder, shootings, stabbings, drug sales, kidnapping, and auto burglary. He has a direct understanding of what it takes to reduce our staggering recidivism rates and redirect those arrested towards school and employment.

Chesa has also been a leader in San Francisco and across the country for fundamental criminal justice reform. He has worked directly with victims of crime and families of prisoners to make the system serve them better. Chesa has led efforts in San Francisco and California to reform our unfair bail system, protect immigrants from deportation, and to establish a pretrial release program in order to increase equity by allowing defendants to keep their jobs and housing while navigating the system.

As our next District Attorney, Chesa's first priority will be to improve public safety by fundamentally reforming our broken criminal justice system that is devastatingly expensive, inefficient, unjust and inhumane. It's broken because more than 2/3 of people who are arrested and prosecuted come back into the system within a few years.

Suzy worked in Bayview Hunters Point to help build the Center for Youth Wellness, an innovative non-profit working to heal children suffering from the impacts of violence and chronic adversity. Her work earned her the James Irvine Leadership Award for California in 2014.

As the President of the San Francisco Police Commission, Suzy prioritized improving the Police Department’s response to violence against women and children, expanding the use technology to solve crime, and making our streets safe for all – pedestrians, bicyclists and motorists. Under her leadership, the Police Commission reformed the City’s use of force policy, and instituted body-worn cameras to increase transparency and improve police-community relations.

Suzy previously served as General Counsel at the California Department of Justice, where she oversaw important cases that were a top priority to state Attorney General Kamala D. Harris. Suzy also served as the Assistant Director of the Division of Law Enforcement in the Department of Justice, overseeing the state’s forensic and digital evidence services. Suzy proudly served as a San Francisco prosecutor, where she prosecuted misdemeanor and felony cases, including domestic violence, elder abuse, and firearms cases.

Suzy is a graduate of Emerge California, a program that trains Democratic women to run for elected office. She is a native San Franciscan and along with her husband, Tom Loftus, and her mother Maureen Roche, are raising three daughters in San Francisco’s Outer Sunset neighborhood