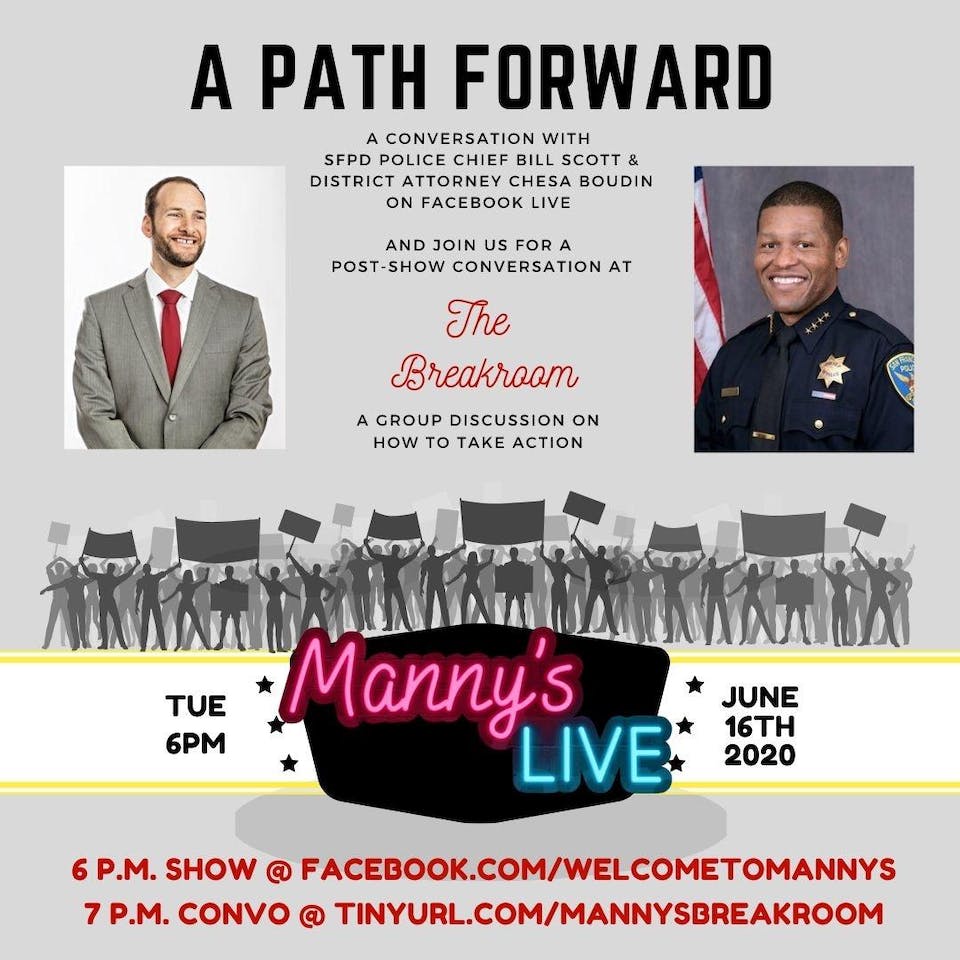 iCal
Google
The San Francisco Chief of Police and the newly elected District Attorney sit down at Manny's to discuss the path forward & how SF can lead.

Note: This live conversation will be broadcasted from Manny's but the place to tune it will be via facebook live here: www.facebook.com/welcometomannys

After the conversation, at 7 PM, please go to the following link to join the post show discussion and action session: www.tinyurl.com/mannysbreakroom

Manny's LIVE is bringing together the San Francisco Chief of Police Bill Scott and newly elected progressive prosecutor, District Attorney Chesa Boudin in the midst of massive protests and unrest to discuss the Black Live Matter movement, the DA's and Chief Scott's separate call for police reforms, and our path forward.

The three of us. In person. At Manny's.

In the midst of a world on fire - pandemic, protests, curfews, riots - what do these leaders think of how to respond? The death of George Floyd ignited what have been some of the largest and most powerful protests in recent memory, as well as tensions between the public and the police.

The protests, marches and kneel-ins of today are an extension of the Black Lives Matter protests that began in 2013 after the shooting of Trayvon Martin.

DA Boudin has called for numerous police reforms focused on accountability. Chief Scott has condemned the assault on Black men.

How can San Francisco lead?

How has and how can the District Attorney's Office and/or the Police Department be a part of the movement to protect black lives?

How will the two of the leaders of law enforcement in the City work to make San Francisco proud?

What are the solutions and how do we get there?

Tune in at 6 PM on the 16th for this first episode of Manny's LIVE to join the conversation.

Following the conversation you'll be asked to join a set of online break out rooms with facilitators who'll be waiting to discuss what you just heard and to help you get involved.

When William “Bill” Scott was sworn in as San Francisco’s new police chief in January 2017, he vowed to build trust both within the department and outside it.

Scott had previously served for 27 years in the Los Angeles Police Department, where he was a deputy chief. He was selected to lead the SFPD after a nationwide search. Then-Mayor Edwin Lee said a major factor in his choice was Scott’s experience in helping lead the Los Angeles department through transformational progress.

Chief Scott has condemned the historically disparate policing of black and brown men, and is leading SFPD through a groundbreaking Collaborative Reform Initiative in partnership with the California DOJ.

Scott grew up in Birmingham, Alabama, and attended the University of Alabama, where he earned a degree in Accounting. He is married with three children.

Chesa Boudin is the new District Attorney of San Francisco. Personally impacted by parental incarceration and the failings of the criminal justice system, Chesa was inspired to become a public defender, and now, decarceral prosecutor. He is focused on reforming the criminal justice system and making our communities safer by developing data-driven policies to expand alternatives to incarceration and treat the root causes of crime. 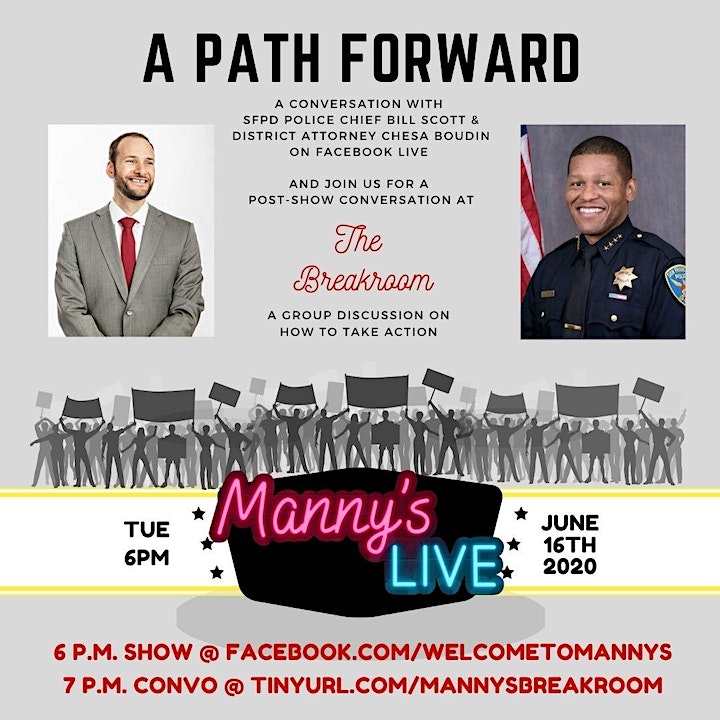