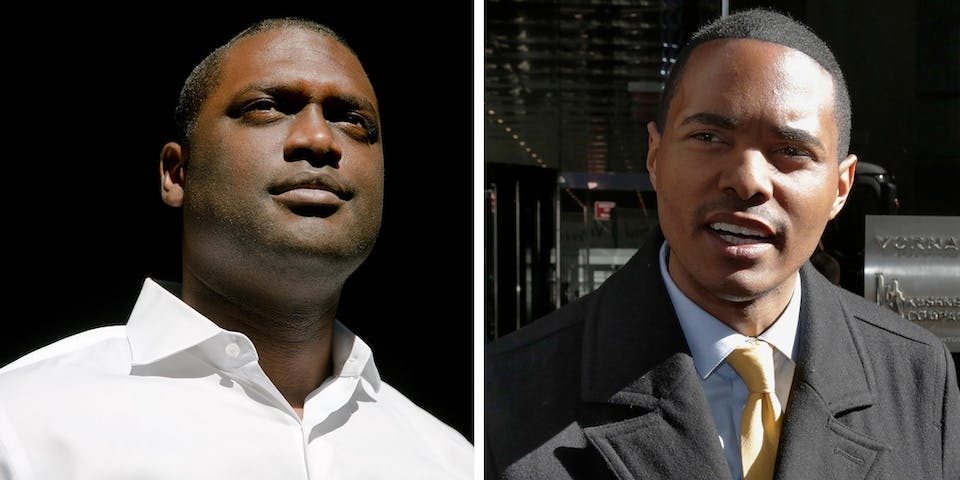 iCal
Google
Mondaire Jones and Ritchie Torres ran against the machine to represent their communities in the House of Representatives. They likely won.

While the final votes are still being counted, and the general election is still to be had, it looks like Mondaire Jones (33) and Ritchie Torres (32) will be the first two black gay men in Congress come January!!

They'll be representing the Bronx and Rockland Country respectively.

Both ran insurgent campaigns and have likely won against all odds. Both were raised by single mothers in the districts they will now represent, came out of the closet, overcame many obstacles, and went to work fighting for their communities.

Mondaire's opponent outspent him 4 to 1 and Ritchie ran against one of the most recognized names in Bronx politics.

So who are these two incredible men?

What is their vision for the future of this country?

What will guide them as they begin their journey in our national legislature and what's been their guiding principles until now?

What got them into politics and what do you they want to accomplish in Congress?

How can you be a part of their story and their work?

Tune in to Manny's LIVE on Tuesday to be a part of this inspiring discussion!

Note: This live conversation will be broadcasted from Manny's but the place to tune it will be via:

After the conversation, at 6:30 PM, please go to the following link to join the post show discussion and action session: www.tinyurl.com/mannysbreakroom

Council Member Ritchie Torres was first elected in November 2013 to represent the 15th Council District in the Central Bronx. As Chair of the Council’s Committee on Public Housing, Council Member Torres oversaw the New York City Housing Authority (NYCHA) which is the largest provider of affordable housing in the country. In this capacity, he introduced and enacted legislation to improve safety and quality of life for thousands of NYCHA residents.

In November 2017, Council Member Torres was elected to his second term and became Chair of the new Oversight and Investigations Committee of the City Council. In this role, he is tasked with investigating matters within the Council’s jurisdiction concerning property, affairs, or government of New York City.

Council Member Torres became active in politics at an early age, first as a fellow in the inaugural class of the Coro NY Exploring Leadership Program, and then going on to work as the Housing Director for Council Member Jimmy Vacca before running for office in 2013.

Mondaire was born to a young, single mother at Nyack Hospital and raised in the working-class Village of Spring Valley, which is in Rockland County. Life wasn’t easy, but the Jones family managed. And Mondaire’s mother always encouraged him to dream big in spite of their circumstances.

After Mondaire was born, his mother dropped out of college. She worked multiple jobs just to make ends meet—even with the aid of a Section 8 housing voucher from the federal government. Mondaire learned early on that, in a low-wage economy that doesn’t work for the average American, government assistance is necessary to fill in the gaps. When he was two years old, Mondaire’s mother was diagnosed with a devastating mental illness.

Like many single moms, Mondaire’s mother leaned heavily on her parents for help raising her kid. Both grandparents had left Jim Crow in Virginia to start a family in New York, where their community in Rockland County embraced them. Mondaire’s grandfather was a janitor at Pomona Middle School. His grandmother cleaned homes in the hamlets of Congers and Hillcrest. When daycare was too expensive, as it is for millions of parents in the United States, she took her grandson to work. In the wealthiest nation on Earth, people should not have to make this absurd choice. Later, Mondaire’s grandmother served lunch in East Ramapo public schools. She did this well into her 70s, on bad knees, just to cover the costs of over-priced medical procedures and prescription drugs. This showed Mondaire the immorality of our nation’s healthcare system.

He got his start in politics as a high school freshman registering and organizing voters to help get a school budget passed to fully fund his public school district. He went on to Stanford University, worked on judicial nominations and criminal justice reform at DOJ in the Obama Administration, attended Harvard Law School, and most recently worked at the Westchester County Law Department litigating the county's biggest cases. When elected, he will be the first openly gay black member of Congress in United States history. In addition to being born and raised in Rockland County, which is in New York’s 17th congressional district, Mondaire has lived in the district for most of his life. He attended public schools in East Ramapo throughout his childhood, and remains proud of the education he received. He is also a lifelong member of the First Baptist Church of Spring Valley.