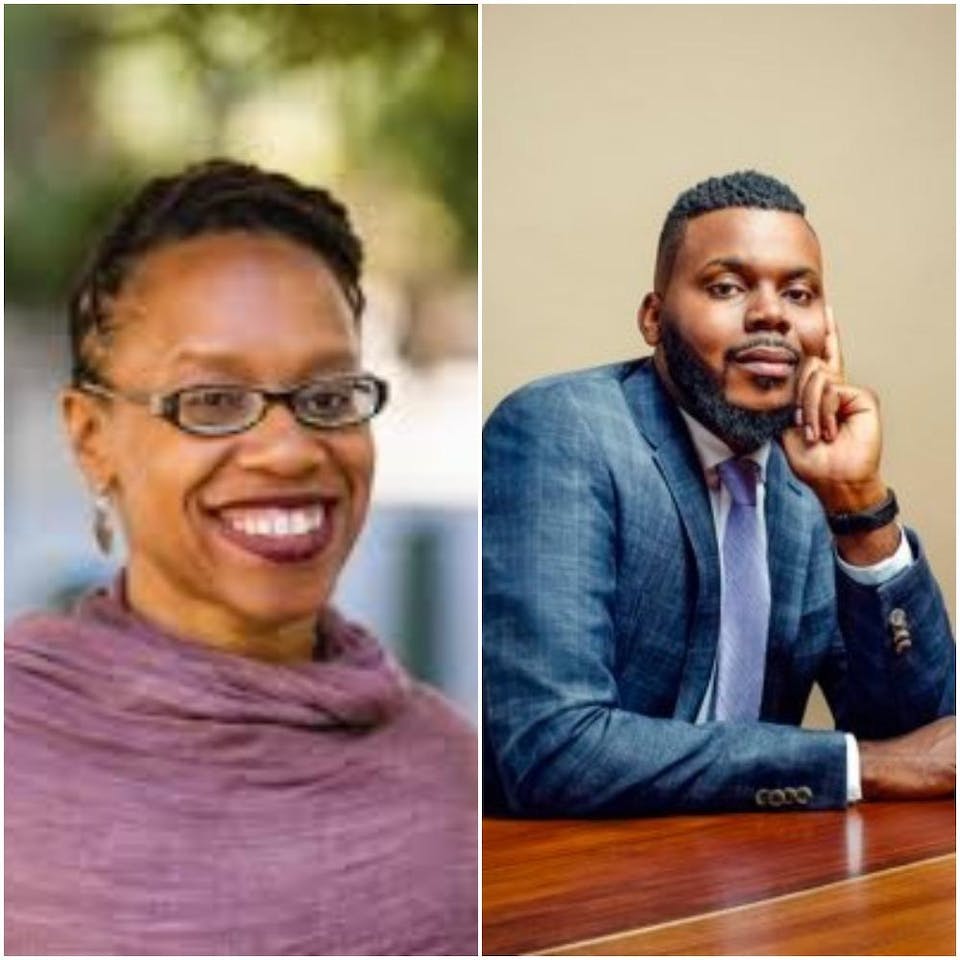 iCal
Google
Two inspirational civic leaders will be coming together at Manny's to discuss politics, spirituality, justice, and the future.

Lateefah Simon is a force of nature and Mayor Michael Tubbs is a shooting star. Combine the two and you are in for a treat. About them both below. Mayor Tubbs is running for re-election and there will be a fundraiser for him immediately before this event to support his campaign.

Lateefah Simon joined Akonadi Foundation as President in August 2016. As a nationally recognized advocate for civil rights and racial justice, she brings over 20 years of executive experience in advancing opportunities for communities of color and low-income communities in the Bay Area. Prior to joining Akonadi, which seeks to eliminate structural racism that leads to inequity in the United States, Lateefah served as Program Director for the San Francisco-based Rosenberg Foundation, a statewide grantmaker focusing on systemic barriers to full access to equity and opportunity for Californians. Lateefah managed the Foundation’s portfolio of grants supporting groundbreaking advocacy in criminal justice reform, immigrant rights, low-wage workers’ rights, and civic engagement. In 2016, Lateefah helped launch the $2 million Leading Edge Fund, created to seed, incubate, and implement bold ideas from the next generation of progressive movement leaders in California.

Before joining Rosenberg, Lateefah was Executive Director of the Lawyers’ Committee for Civil Rights of the San Francisco Bay Area, where she revamped the 40-year-old organization’s structure and launched successful community-based initiatives, including the Second Chance Legal Services Clinic. Lateefah also initiated San Francisco’s first reentry services division and spearheaded the flagship program, Back on Track, under the leadership of then-District Attorney Kamala D. Harris. Back on Track, an advocacy program for young adults charged with low-level felony drug sales, brought recidivism for the population it serves below 10 percent. Lateefah’s passion for supporting low-income young women and girls, and her advocacy for juvenile and criminal justice reform, began at San Francisco’s Center for Young Women’s Development (CYWD), now called the Young Women’s Freedom Center. Lateefah became Executive Director of that grassroots organization, run for and by young women who come through and are affected by these systems, at age 19; she remained in that role for 11 years.

Lateefah has received numerous awards for her work, including the MacArthur “Genius” Fellowship and the Jefferson Award for extraordinary public service. She was named ‘Most Promising New Foundation President’ by Inside Philanthropy in 2017 and was one of the Chronicle of Philanthropy’s 40 Under 40 in 2016. The California State Assembly named Lateefah Woman of the Year and she has also been recognized by the Ford Foundation, the National Organization for Women, Lifetime Television, and O Magazine. In 2016, Lateefah was elected to serve District 7 on the BART Board of Directors and was appointed by Gov. Jerry Brown to the California State University’s Board of Trustees. She also serves on the Board of Directors for Tipping Point Community.

When not working, Lateefah spends her time enjoying Oakland’s many family-friendly spaces with her two daughters.

On November 8, 2016, Michael Tubbs was elected to serve as the mayor of the City of Stockton, California. Upon taking office in January 2017, Michael Tubbs became both Stockton’s youngest mayor and the city’s first African-American mayor. Michael Tubbs is also the youngest mayor in the history of the country representing a city with a population of over 100,000 residents.

Mayor Michael Tubbs has secured over $20 million in philanthropic capital to launch the Stockton Scholars, a place-based scholarship that aims to triple the number of Stockton students entering and graduating from college. Mayor Tubbs also brought Advance Peace to Stockton, a data-driven program that works to reduce gun violence in communities. Additionally, with an innovative public-private partnership supported by a $1,000,000 seed grant from the Economic Security Project, Tubbs launched the nation’s first municipal level basic income pilot, the Stockton Economic Empowerment Demonstration.

Before becoming mayor, Michael Tubbs served as Stockton's District 6 City Councilmember. Elected at age 22 in 2013, he became one of the youngest City Councilmembers in the country. As a councilmember, Tubbs created the Reinvent South Stockton Coalition, championed the creation of the City’s Office of Violence Prevention and was part of the council that led the city out of bankruptcy as Chair of the Audit and Legislative Committee.

Mayor Tubbs graduated in 2012 from Stanford University with a Bachelor’s and Master’s degree with honors. Tubbs has been a college course instructor for Aspire Public Schools and a Fellow at the Stanford Institute of Design and the Emerson Collective. Michael is a Stockton native and product of Stockton public schools.