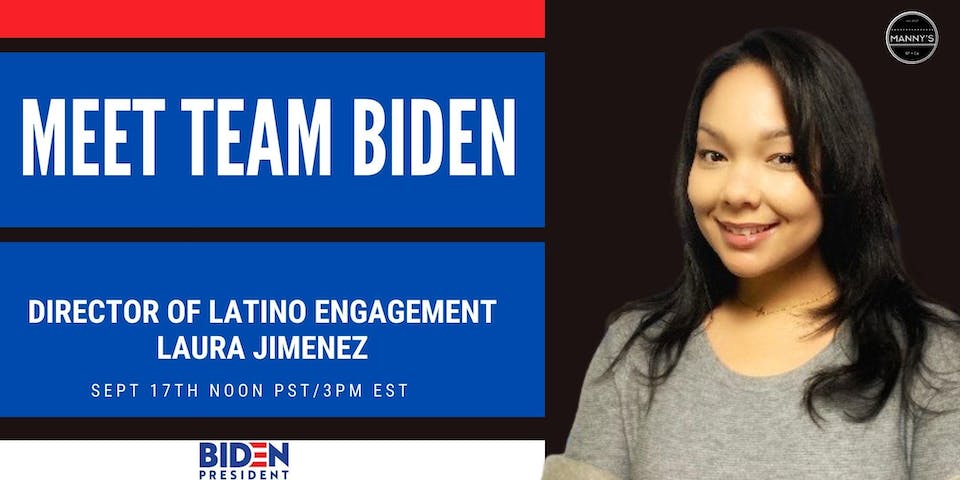 iCal
Google
Next in our Meet Team Biden Series: This week we're sitting down with Joe Biden's Director of Latino Engagement, Laura Jimenez

Ok so the 2020 election is right around the corner and it's time to get informed, involved, ready, and willing.

You probably know all about Joe Biden by now but how well do you know the senior folks running his campaign for President? Well - now's your chance?

These are the change makers who are fighting for victory everyday - the ones who we'll be able to thank on November 4th once we win.

But who are they?

What are their stories?

Why are they working for Joe Biden?

What does it say about him that these are folks by his side?

We continue this series with Laura Jimenez the Director of Latino Engagement.

"Working directly with her community fills her with pride, and listening to Juan Luis, a merengue and bachata singer considered a Dominican national treasure, brings her back to that work every time.

Ms. Jiménez grew up in the Bronx, but she would spend summers in the Dominican Republic with her father. After high school, she moved to Florida.

“I had to get rid of a lot of accents,” Ms. Jiménez said. “And there was always this feeling that you never fully belonged anywhere.”

It took Ms. Jiménez a long time to love her identity, and it wasn’t until six years ago that she realized that her background was valuable.

“It is my family that is on the line here,” she said. “It’s my community that is being attacked. So this all feels very, very personal every day.”

She learned early on in politics that there would often be only a few Latinos in the room.

“It can be very lonely, especially when you start working in these spaces,” she said. “But you figure out quickly that your voice is important, and if you don’t speak up, that perspective will never be heard.”

But speaking up is essential, Ms. Jiménez said, particularly given the stakes of the 2020 race.

“Trump is using our community to win re-election. He’s demonizing us,” she said. “And because this election is about us, we have to prioritize, as a community, someone who can defeat this man.”

She believes former Vice President Joseph R. Biden Jr. will fight for Latinos, and she says he has been reflective over the millions of deportations that happened under the Obama administration. She pointed to his immigration plan as evidence.

“As an immigrant myself, and someone who worked on this plan, I see a lot of things there that will help a lot of people in our community,” she said."