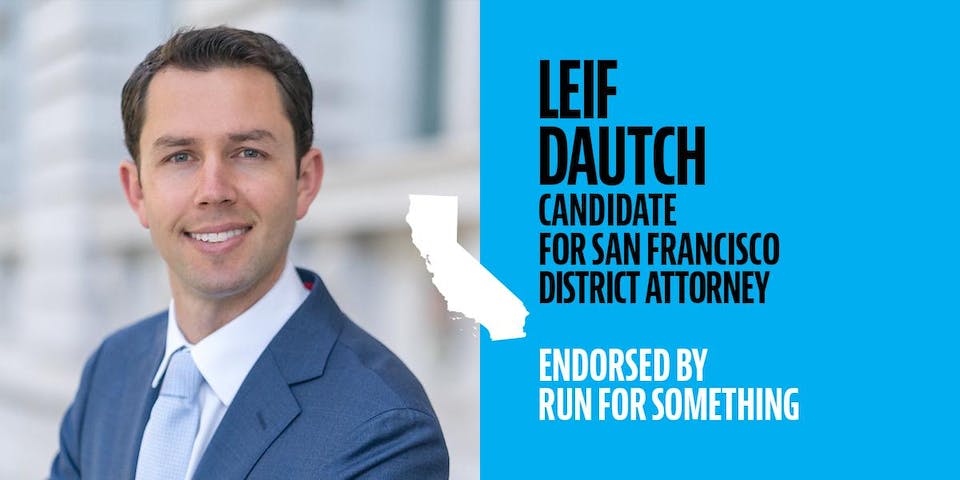 iCal
Google
Leif Dautch is running for District Attorney of San Francisco and he wants hear your ideas.

How safe is San Francisco?

Do you feel well-represented by the city's criminal justice system?

Got an idea to address a criminal justice or public safety problem in San Francisco?

Come pitch it to a panel of community leaders and see your idea become law!

Leif Dautch is a Deputy Attorney General for the State of California and the Past President of the San Francisco Juvenile Probation Commission. The son of an organic farmer and a registered nurse, Leif grew up along California’s Central Coast. After graduating with honors from Yale and Harvard Law School, Leif returned to California to extern for San Francisco District Attorney Kamala Harris and to clerk for a Ninth Circuit judge in San Francisco. He worked at a law firm and on President Obama’s reelection campaign before joining the Attorney General’s Office in 2012. He has prosecuted more than 300 criminal cases in state and federal court, from trials to arguments before the California Supreme Court. Leif has also served as a policy advisor, drafting legislation and testifying before the California State Assembly and State Senate on issues ranging from human trafficking to environmental protection. As an Assistant Team Leader, he helps supervise a team of attorneys and has served on the Criminal Division’s Hiring Committee and Technology Task Force.

In addition to being elected President by his peers on the San Francisco Juvenile Probation Commission, Leif is the Vice Chair of the California Lawyers Association’s Executive Committee on Criminal Law. He started an environmental advocacy group to block fracking projects on public land, and authored and passed the California Democratic Party’s platform plank against fracking in national forests. He has also provided pro bono eviction defense and represented indigent inmates in prison disciplinary matters. Leif and his wife, Brittany, frequently volunteer at Glide Memorial Church and the Raphael House homeless shelter. Leif was recognized on Forbes’ list of rising lawyers and policymakers and has written for the San Francisco Chronicle, San Francisco Examiner, and Washington Post on topics including car break-ins, environmental justice, and income inequality.