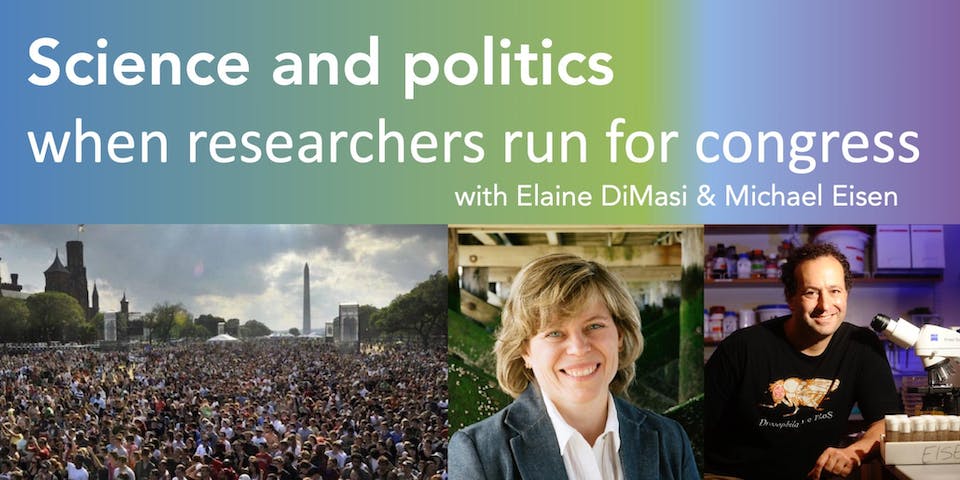 Science and Politics: When Researchers Run for Congress

iCal
Google
Science and technology is at the heart of modern ways of living, yet scientist are under-represented in Congress.

Science and technology is at the heart of modern ways of living, from planes to cell phones, yet scientist are under-represented in congress, where their voice is hardly heard. “Listen to the scientists,” said environmental icon Greta Thunberg in her recent testimony in Congress. The emergence of alternative facts in the Trump era has pushed a handful a scientists across the country to the political arena.

The scientists Elaine DiMasi and Michael Eisen will share their motivation for running and their experience engaging politics, how they found support, but also their advice on how to engage the public with science and the best ways to get lawmakers’ attention.

“It would be really nice to have scientists ask the questions of the Cabinet appointees,” says Michael Eisen, “because the senators don’t seem to understand the issue and aren’t asking the right questions.”

Dr. Elaine DiMasi is a project manager at Berkeley Lab, where she recently joined the leadership team for the upgrade of the synchrotron, a particle accelerator used for basic science experiments. DiMasi had resigned from her position as a tenured scientist at Brookhaven National Laboratory in NY to compete in the Democratic primary for the US House of Representatives (NY-1) in 2018, prior to moving to the Bay Area.

Dr. Michael Eisen is a professor of biology at the University of California Berkeley. In 2018, he ran in the primaries for the California seat in the US Senate. He is the founder of Public Library of Science (PLoS), a pioneering open access academic journal based in San Francisco. He is part of the scientific advisory board of Impossible Food, a vegan food company.