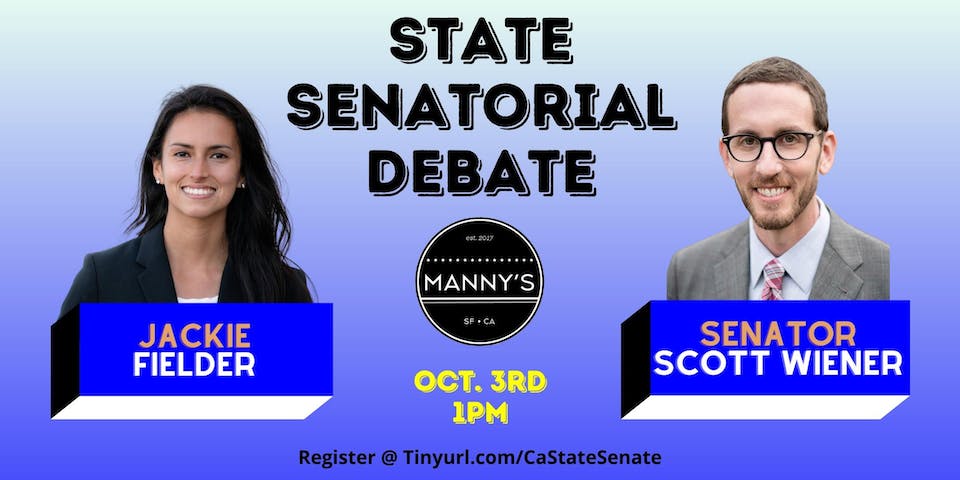 iCal
Google
Sen. Scott Wiener is running for re-election as State Senator for District 11.Jackie Fielder is running against him. We're hosting a debate.

ZOOM LINK TO JOIN IS BELOW:

NOTE: This event will be filmed at Manny's but is NOT an in person event, only online.

District 11 is a big ol' district in our esteemed State Senate.

Scott Wiener has been representing the district since 2016 and is running for re-election.

Do you know who you're going to vote for?

Have you made your decision yet?

Want to learn more about each candidate?

As a part of our mission to create a place for the public to become more civically engaged, Manny's is going to bring both candidates together IN PERSON (socially distanced w/masks) to the Manny's LIVE studio and we'll be streaming this debate to all you listeners and learners out there.

The debate will cover 5 sections:

In the Senate, Senator Wiener works to make housing more affordable, invest in our transportation systems, increase access to healthcare, support working families, meaningfully address climate change and the impacts of drought, reform our criminal justice system, reduce gun violence, reduce California’s high poverty rate, and safeguard and expand the rights of all communities, including immigrants and the LGBT community.

Senator Wiener has authored 36 bills that were signed into law. Among them are SB 35, a landmark bill to streamline housing approvals in cities not meeting their housing goals; SB 822, which enacts the strongest net neutrality protections in the nation; SB 1045 and SB 40, which expand and strengthen California’s conservatorship laws to help individuals who are living on our streets with severe mental health and substance use disorders; SB 700, which significantly expands access to renewable energy storage; SB 923, which modernizes California’s eyewitness identification standards to ensure innocent people are not sent to prison; SB 136, which reduces mass incarceration by repealing California’s most common used sentence enhancement; SB 219, which protects LGBT seniors in long-term care facilities; and SB 159, which allows pharmacists to provide PrEP and PEP (powerful HIV prevention medications) without a physician’s prescription.

Senator Wiener is also the author of landmark legislation, SB 50, which, if passed, will override local restrictive zoning to legalize apartment buildings and affordable housing near public transportation and job centers. (Currently, many communities ban apartment buildings, even right next to major transit hubs.)

Before his election to the Senate, Senator Wiener served on the San Francisco Board of Supervisors, representing the district previously represented by Supervisor Harvey Milk. During his time on the Board of Supervisors, Senator Wiener authored a number of first-in-the-nation laws, including mandating fully paid parental leave for all working parents, requiring water recycling and solar power in new developments, and banning public spending in states with LGBT hate laws. He focused extensively on housing and public transportation, authoring laws to streamline approvals of affordable housing, to legalize new in-law units, and to tie public transportation funding to population growth.

Before his election to the Board of Supervisors, Senator Wiener spent 15 years practicing law: as a Deputy City Attorney in the San Francisco City Attorney’s Office, in private practice at Heller Ehrman White & McAuliffe, and as a law clerk for Justice Alan Handler on the New Jersey Supreme Court. Senator Wiener co-chaired the Alice B. Toklas LGBT Democratic Club, BALIF (the Bay Area’s LGBT bar association), and the San Francisco LGBT Community Center, as well as serving on the national board of directors of the Human Rights Campaign, the nation’s largest LGBT civil rights organization.

Senator Wiener grew up in New Jersey, the son of small business owners, and attended public school. He received a bachelor’s degree from Duke University and a law degree from Harvard Law School. He spent a year in Chile on a Fulbright Scholarship doing historical research. He has lived in San Francisco’s Castro neighborhood for over 22 years.

I’m a Native American (Two Kettle Lakota and Hidatsa), Latina, and queer educator and organizer. I was raised in Southern California by a single mother in an underserved neighborhood. I worked hard, attended public schools, and was fortunate to earn a place at Stanford University.

After graduating with both a BA in Public Policy and a MA in Sociology, I joined the fight of my Indigenous relatives and our allies against the Dakota Access Pipeline. I was proud to stand up against the oil companies and banks who used violence against people protecting sacred land.

That battle led me back to San Francisco with a vision to take on the banking industry. I became a statewide organizer for public banking in order to put our $11 billion of city tax dollars to work for the community, rather than in the hands of huge corporations contributing to climate change. As co-founder and lead organizer of the San Francisco Public Bank Coalition, I took on Wall Street lobbyists and helped to both pass statewide legislation and introduce a local ordinance to create the first municipal bank in the country.

I also ran the No on H campaign in 2018 to preserve the power of the police commission and stop a dangerous police use of force policy. That same year, Alicia Garza, co-founder of #BlackLivesMatter, tapped me to take over her Race, Women, and Class course in the College of Ethnic Studies at San Francisco State University, where I became a California Faculty Association union member.

I’m running for State Senate because we have a mandate to be bolder. As a Democratic Socialist inspired by America’s new young leaders, I believe our generation has no time left for excuses or despair. I’m not afraid of a challenge, and I have a record of fighting for people and winning, even against the odds. 2020 needs to be the year we have the courage to take on the crises facing our city, our country, and our planet. 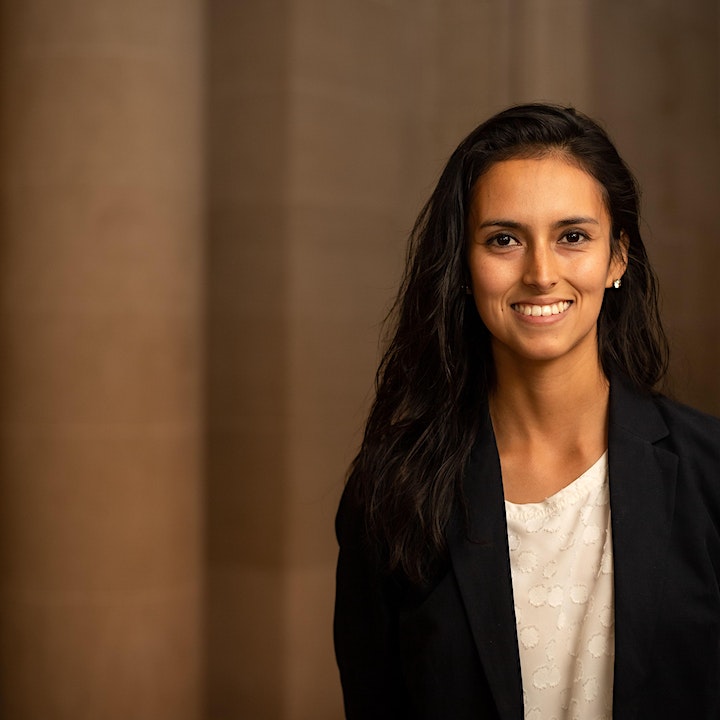 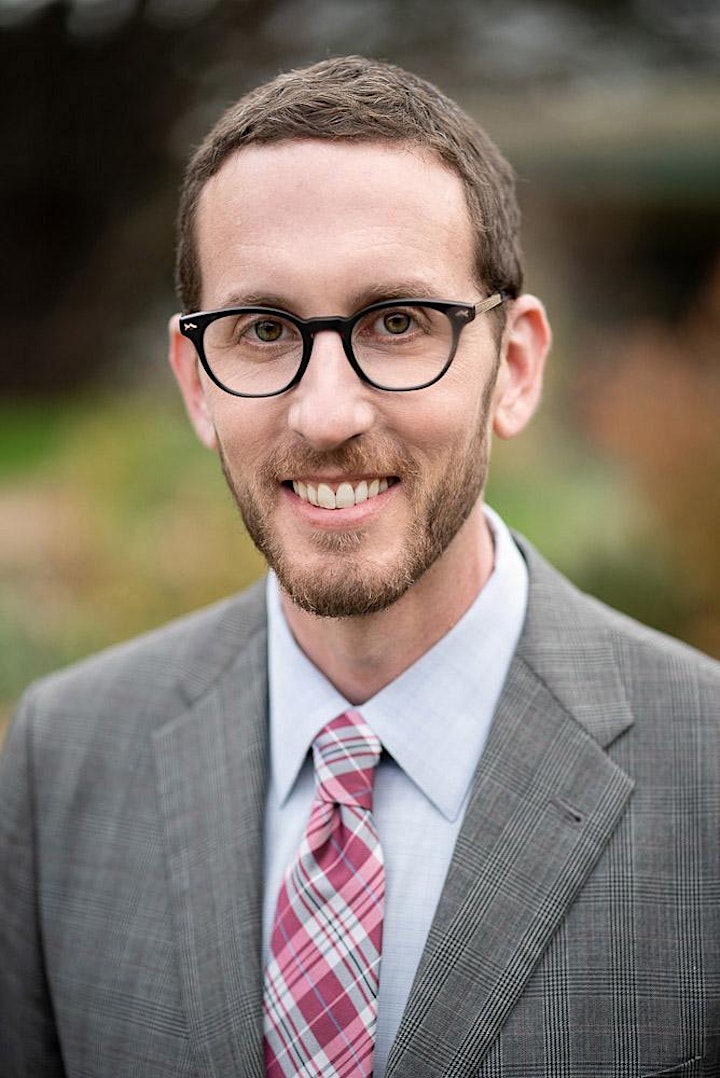