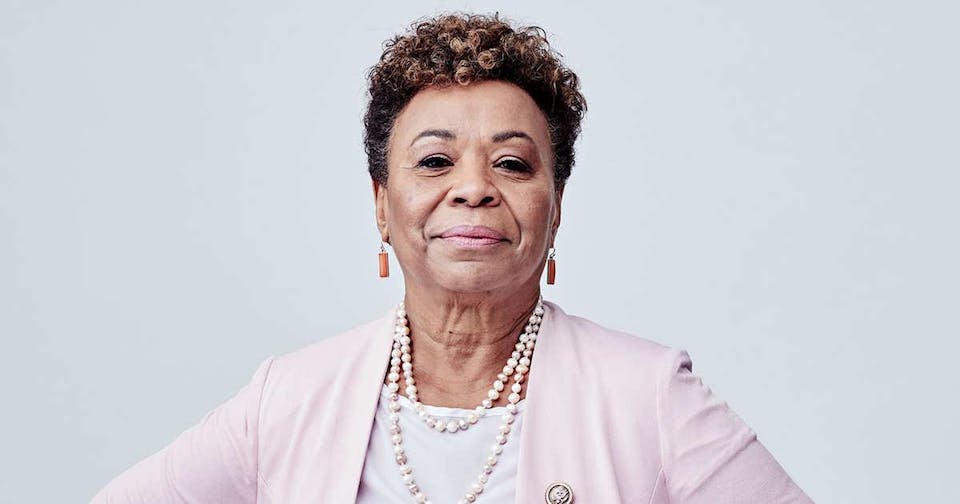 iCal
Google
Congresswoman Barbara Lee has been holding down the progressive voice in Congress . since 1998. Come meet her!

Only African American woman in Democratic Leadership, serving as Co-Chair of the Policy and Steering Committee.

Only member to vote against the Iraq War, believing it would become a blank military check.

She's coming to Manny's at lunchtime to be in conversation with incredible Mission community leader Miguel Bustos about her life, her time in Congress, her thoughts on the new crop of representatives, impeachment, and to answer your questions!

Congresswoman Barbara Lee was born in segregated El Paso, TX and attended St. Joseph’s Catholic School, where she was taught by the Sisters of Loretto, an order dedicated to promoting justice and peace. Her father was a veteran of two wars and her mother broke many glass ceilings and racial barriers. After grammar school, Congresswoman Lee moved to San Fernando, California and worked with the local NAACP to integrate her high school cheerleading squad.

As a single mother raising two sons, Congresswoman Lee attended Mills College and received public assistance while building a better life for her family. As president of Mills College’s Black Student Union, she invited Congresswoman Shirley Chisholm, the first African American woman elected to Congress, to speak on campus. As a result of this meeting, Congresswoman Lee registered to vote for the first time and worked on Congresswoman Chisholm’s historic presidential campaign, including serving as her delegate at the 1972 Democratic National Convention in Miami, FL.

Congresswoman Lee received her Masters of Social Work from the University of California, Berkeley, specializing in psychiatric social work. During her graduate work, Congresswoman Lee founded the Community Health Alliance for Neighborhood Growth and Education (CHANGE, Inc.) which provided mental health services to many of the East Bay’s most vulnerable individuals.

After leaving Congressman Dellums’ office in 1987, Congresswoman Lee founded a facilities management company that grew to employ over 500 people. As a small business owner in the East Bay, Congresswoman Lee worked with people from all walks of life.

In 1998, Congresswoman Barbara Lee was elected to serve California’s 9th congressional district (now the 13th) in a special election. In 2001, Congresswoman Lee received national attention as the only Member of Congress to oppose the authorization for the use of military force (AUMF) in the wake of the horrific events on September 11th. The Congresswoman believed this AUMF would become a blank check for endless war. As of 2013, this authorization had been used more than 30 times to engage in military action without Congressional oversight. Congresswoman Lee is working to repeal this blank check and restore Congress’s constitutional oversight to matters of war and peace. She was also an outspoken opponent of the Iraq War.

Congresswoman Lee has long advocated for legislative action to end poverty. In 2007, she worked with a diverse coalition of Members to create the Out of Poverty Caucus. In 2013, she became chair of the Democratic Whip Task Force on Poverty, Income Inequality and Opportunity. As chair, she leads more than 100 Members of Congress in crafting and advancing legislation to lift millions of American families out of poverty and into the middle class.

Since her time in the California legislature, Congresswoman Lee has been a fierce advocate for ending HIV and ensuring an AIDS-free generation. Since entering Congress, she has authored or co-authored every major piece of HIV/AIDS legislation including the legislative frameworks for the President’s Emergency Plan for AIDS Relief (PEPFAR) and the Global Fund to Fight AIDS, Tuberculosis and Malaria. Congresswoman Lee’s legislation establishing a USAID special advisor for orphans and vulnerable children was enacted into law in 2009. In 2011, Congresswoman Lee formed the bipartisan and bicameral Congressional HIV/AIDS Caucus, which she co-chairs.

Miguel was born and raised in the Mission District of San Francisco. He attended St. Peter’s Elementary School on 24th and Florida Streets and Archbishop Riordan High School. He holds a Bachelors Degree in Political Science for Holy Names University and a Masters in International Peace and Conflict Resolution from the School of International Service at the America University in Washington, DC.

Most of Miguel’s career has been as an appointed official to local and national elected officials: first as Policy Advisor for President Clinton and Vice President Gore at the White House; Deputy District Director for Congresswoman Barbara Lee; Director of Boards and Commissions for San Francisco Mayor Gavin Newsom; and most recently Director of Intergovernmental Affairs for Mayor Ronald V. Dellums.

His nonprofit and philanthropic career highlights include: serving as Executive Director of the California Latino Civil Rights Network (Latino Network). The only statewide organization that focuses on the threats to civil rights aimed at the Latino community in California; serving as Program Officer for the Marguerite Casey Foundation (MCF). As a member of the MCF team his responsibilities included researching and evaluating potential grantees, working with Latino, Native American, Asian, African-American and LGBT communities and organizations, and analyzing and educating grantees on public policy. His regions included California, the Southwest, US/Mexico Border and Native American reservations and communities; and working as Community Relations Advisor at the California Community Technology Foundation of California (Now known as Zerodivide).

Previously, Miguel was Senior Vice President, Community Relations and Outreach Regional Director at Wells Fargo in San Francisco, California. He also served as the Senior Program Manager for the Americas for the Levi Strauss Foundation. He managed grantmaking in the Foundation’s global giving areas of HIV/AIDS, asset building and workers’ rights in the regions of Latin America and Canada. He was also responsible for HIV/AIDS grantmaking domestically in the United States and LS&Co.’s Community Involvement Teams in Latin America and Canada.

Miguel loves his city and still lives in his childhood home in the Mission District of San Francisco.